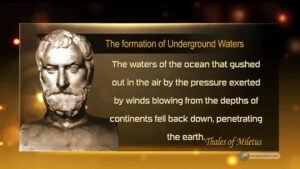 The Qur’an corrects the Greeks when it come s to Underground water.

================
The first significant discovery of water’s perpetual cycle and the formation of underground waters was👉 by Bernard Palissy in 1580. 👈According to him, underground waters were formed by the penetration of rain water into the earth. R.Remenieras, who is the author of the article of “water information” of Encyclopedia Universalis, gives the following information: “The concepts of purely philosophic character about the natural phenomena related to waters had to wait until the Renaissance in order to yield their places to impartial observations.“
Now let’s look at funny false science of Greek philosophers😂
1]Thales of Miletus explains the reason of the existence of underground waters as follows: the waters of the ocean that gushed out in the air by the pressure exerted by winds blowing from the depths of continents fell back down, penetrating the earth. That is, according to the Thales of Miletus; underground waters occur as a result of the overflowing of oceans due to winds.
2]Plato shared this view and believed that its return to the ocean was caused by a huge whirlpool.
3]Aristotle contended that the vapor that rose from the earth condensed in the cool recesses of mountains, forming subterranean lakes and spring waters that were fed by these lakes.
However, the Qur’an gives the information that underground waters form as a result of the penetration of rain water into the earthages ago, in a time when there were no science and techniques
The information of the Qur’an about  the formation of the underground waters as a result of the penetration of rain water into the earth clearly stated 14 centuries ago was put forth in Europe in the 16th century and only at that time, they were able to oppose Aristotle.
If the Qur’an is not accepted as the book of Allah after this information, how can the trueness of this news of the Qur’an be explained?
How was this ecological information which could not be discovered by so many intelligent philosophers discovered by an illiterate person fourteen centuries ago?
Attributing this information to the discovery of an illiterate person who lived at that age could only be possible by insanity.
Then, the Qur’an is the word of Allah, who brings the water from skies and lets it be absorbed by the underground springs and informs us about this miraculous news 1400 years ago.
____________________
أَلَمْ تَرَ أَنَّ اللَّهَ أَنْزَلَ مِنَ السَّمَاءِ مَاءً فَسَلَكَهُ يَنَابِيعَ فِي الْأَرْضِ ثُمَّ يُخْرِجُ بِهِ زَرْعًا مُخْتَلِفًا أَلْوَانُهُ ثُمَّ يَهِيجُ فَتَرَاهُ مُصْفَرًّا ثُمَّ يَجْعَلُهُ حُطَامًا ۚ إِنَّ فِي ذَٰلِكَ لَذِكْرَىٰ لِأُولِي الْأَلْبَابِ
Do you not see that Allah sends down rain from the sky and makes it flow as springs [and rivers] in the earth; then He produces thereby crops of varying colors; then they dry and you see them turned yellow; then He makes them [scattered] debris. Indeed in that is a reminder for those of understanding.
(Az-Zumar 39:21) 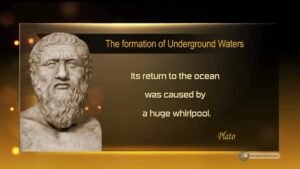