To Him belongs all the universe. He has no partner in His kingdom. He is the judge of the day of judgment. Allah defines Himself in one Aya which is the greatest Aya of all Ayats (verses) saying:
((Allah – there is no deity except Him, the Ever-Living, the Sustainer of [all] existence. Neither drowsiness overtakes Him nor sleep. To Him belongs whatever is in the heavens and whatever is on the earth. Who is it that can intercede with Him except by His permission? He knows what is [presently] before them and what will be after them, and they encompass not a thing of His knowledge except for what He wills. His Kursi extends over the heavens and the earth, and their preservation tires Him not. And He is the Most High, the Most Great.))
Surat Al Baqara. 255.
Allah the creator of existence, has no partner in his creation. He is not a man nor son of man. Has no son or family.
When He wants to create something He says to it be and it is.
He has no plural, no gender and nobody can encompass Him but He encompasses all that exists.
He is infallible has no defects not born and didn’t beget. He is all powerful, the fashioner and great designer of universe as modern science calls Him.
He is the Merciful but at the same time the most Powerful.
Allah is the deity to whom worship should ONLY be attributed. He is One and unique in all his Oness of Lordship, Godship, Names, Attributes and actions.
He is a supreme, uncomparable and beyond measure being.
We believe in Allah without images known to us but known only by Him.
We know from prophetic sayings that are preserved like the qur’an that God has eyes face, leg, foot. etc. However, whatever comes to your mind God is unlike it.
That’s because He said in the Qur’an ; ((Nothing is like Him but he’s all Seeing all Hearing))
Some diverted sects may thing  Allah speaks but with an unheard voice (Ashaariya), others think God is everywhere?! (Soffi or Pantheists) which is really a total falacy because we are told 7 times in the Noble Quran that Allah ELEVATED or ESTABLISHED on His Throne over the 7th Heaven. Other sects assimilate God to His creation or negate His beautiful Names.
However, briefly, nobody can lead you to Allah except “Sunna and Consensus” group especially the moderate Salafi one calling to Him with clear and authentic proofs from Quran and Sunnah. They are mainstream and majority all over the world.
Some other religions teach “God is everywhere.” This is actually called “pantheism” and it is the opposite of our belief system in Islam. Allah tells us clearly there is nothing, anywhere in the universe like Him similar to his likeness, nor is He ever in His creation.
Allah tells us
Death does not take him
Allah = Has no gender (not male and not female)
“He” is used only out of respect and dignity – not for gender
Allah = Always singular – Never plural
“We” is used only as the “Royal WE” just as in English for royalty
Allah = Means “The Only One to be Worshipped”
Before I end my explanation, I must say that Allah does not compel anybody to enter Islam but grants humanity free will to choose for themselves, but he will judge us due to the mind he gave us.
Also, believing in Allah requires from us to apply His command which is the implementation of faith (application of amonotheism through deeds).
IIN WEBSITE
PLEASE SHARE ABUNDANTLY JAZAKUMU ALLAHU KHAYRAN 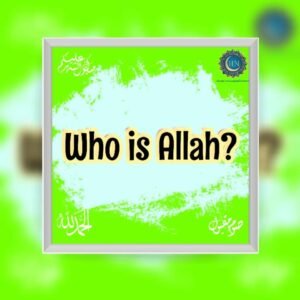