The return of ice age.
💥A NEW ISLAMIC MIRACLE 👇🏻

We’re Due For Another Ice Age But Climate Change May Push It Back Another 100,000 Years, Researchers Say

The big ice ages account for roughly 25 percent of the past billions of years on Earth, says Sandstrom. The most recent of Earth’s five major ice ages in the paleo record dates back 2.7 million years and continues today.
▪︎▪︎▪︎ 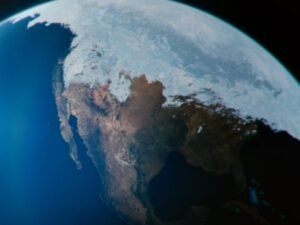 See this reference too
DailyMail
the world could indeed witness a return to some kind of ‘mini ice-age’ in which the great rivers of Europe again freeze, temperatures fall by two degrees centigrade or more, and fierce winters grip Britain and mainland Europe with lethal results. 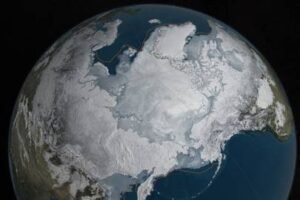 Watch this one too
https://youtu.be/z6_h_sTVJ0g

Prophet Muhammad peace be upon Him says

The Hour will not begin until the land of the Arabs once again becomes meadows and rivers.” [Muslim]

Nasa mentions that Northern Saudi Arabia hosts some of the most extensive sand and gravel deserts in the world, but modern agriculture has changed the face of some of them.

Nasa says they have photograph from astronauts on the International Space Station presents an almost surreal view of abundant green fields in the midst of a barren desert.

a sense of scale, the agricultural fields in active use (dark green) or fallow (brown to tan), are approximately one kilometer in diameter. While much of the Wadi As-Sirhan Basin shown here is sandy (light tan to brown surfaces) and relatively flat, low hills and rocky outcrops (dark gray) of underlaying sedimentary rocks are visible at image left and right.

Nasa has special landsats to gather data about the Earth’s surface resources.

agricultural fields are about one kilometer across. Healthy vegetation appears bright green while dry vegetation appears orange. Barren soil is a dark pink, and urban areas, like the town of Tubarjal at the top of each image, have a purple hue. Credit: NASA/GSFC

Moreover Nasa website mentions that Because rainfall in this area is now only a few centimeters (about one inch) each year, water here is a non-renewable resource. Although no one knows how much water is beneath the desert, hydrologists estimate it will only be economical to pump water for about 50 years. 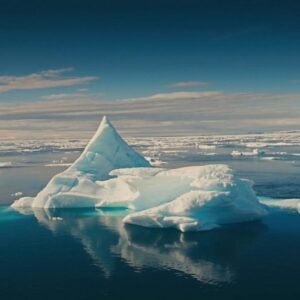 The data from these and other Landsat satellites has been instrumental in increasing our understanding of forest health, storm damage, agricultural trends, urban growth, and many other ongoing changes to our land.

1.Arab lands were flowing rivers in the past

2. And it will return

The Prophet, sallallaahu ‘alayhi wa sallam, said: “The Hour will not begin until the land of the Arabs once again becomes meadows and rivers.” [Muslim]

Abu Hurayrah, may Allaah be pleased with him, narrated that the Messenger of Allaah, sallallaahu ‘alayhi wa sallam, said: “The Hour will not come before wealth becomes abundant and overflowing so much that a man will take the Zakaah due on his property but will not find anyone to accept it from him and till the land of Arabia becomes meadows and rivers.” [Muslim]

Abu Hurayrah, may Allaah be pleased with him, narrated that the Prophet, sallallaahu ‘alayhi wa sallam, said: “‘The Hour will not come until the land of the Arabs goes back to being meadows and rivers; and until one travels from Iraq to Makkah fearing none but the highwaymen; and until Al-Harj becomes widespread.’ It was said, ‘What is Al-Harj, O Messenger of Allaah?’ He said: ‘Murder.’” [Ahmad]

According to Alphred Kröner geologist specialist on the Arabian peninsula says

Arab lands were flowing rivers in the past.

Professor Alfred Kröner (8 September 1939 in Kassel, Germany ) is a retired Professor of Geology at Johannes Gutenberg University of Mainz in Mainz, Germany. He specializes in the pre-Cambrian geology of Africa.

Why was the land covered with sand?

Allaah The Exalted Says (what means): {As for ‘Aad, they were arrogant upon the earth without right and said, “Who is greater than us in strength?” Did they not consider that Allaah Who created them Was greater than them in strength? But they were rejecting Our signs. * So We Sent upon them a screaming wind during days of misfortune to make them taste the punishment of disgrace in the worldly life; but thepunishment of the Hereafter is more disgracing, and they will not be helped.} [Quran 41:15-16]

Aad tribe to which prophet Aad came was lakes and watercourse ; full of life and water until the time of the people of ‘Aad, who established an unparalleled material civilization in Southern Arabia at that time

This civilization used to export goods to Europe, which was primitive at that time.

🚩⚠Over to non Muslims

Was prophet Muhammad specialist in climat studies or a member in Nasa?

Did our prophet know about greenhouse effect” phenomenon or Allah told him?

Who told prophet Muhammad about glacial cycles that covered the land starting from one of the two poles (or both of them) towards the equator.

See how Allah revived the land of desert after its death