The new principal charter eradicates Islamic values and legislates for Muslims what is against their beliefs.

The Muslim groups expressed disagreement about the text because it risks “weakening the bonds of trust” as well as “undermine honor of Muslims.”

The Coordination Committee of Turkish Muslims in France (CCMTF) and Milli Görüş Islamic Confederation (CMIG) along with the Faith and Practice movement, announced Jan 20, that they have not signed the charter which was approved and presented to President Emmanuel Macron.

They demanded amendments to the text of the 10 point charter which Macron helmed as “foundational text for relations between the State, Islam and France.” 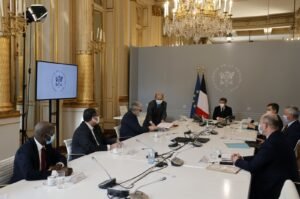 The rejection of the charter comes as France is engaged in a bitter feud with Islamic countries, including Turkey, for offensive caricatures of Prophet Muhammad peace be upon him
— 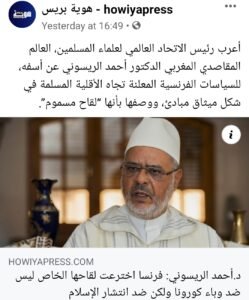 The charter rejects “instrumentalising” Islam for political ends and affirms equality between men and women, while denouncing practices such as female circumcision, forced marriages and “virginity certificates” for brides.

The  text affirms the “compatibility” of the Muslim faith with “secularism”, “equality between men and women” and rejects “the instrumentalization of Islam for political ends”. 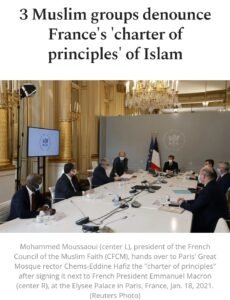 This reaffirmation of republican principles was demanded by President Emmanuel Macron as part of his offensive against separatism and radical Islam, which has since been formalized in a bill whose consideration begins on January 18 in Parliament.

Macron had increased his pressure on Muslim representatives after the jihadist attacks against teacher Samuel Paty in mid-October and in the Basilica of Nice two weeks later.

▪︎▪︎▪︎
What does the charter say?

The charter contains ten articles confirming the compatibility of Islam with French law. It rejects “extremist currents” within Islam.
The preamble states that the religious principles of Islam cannot supplant the principles behind France’s constitution and laws.

In a key development, the text acknowledges the right of a Muslim to change religion or to reject all religion – reportedly a subject of considerable disagreement during attempts to thrash out the document, according to what Le Figaro newspaper describes as unnamed sources.

🍂The charter affirms that the equality of women and men is a fundamental principle “also attested in the Coranic text” and asserts that “certain so-called Muslim practices have no basis in Islam”.

The process included a questionnaire put to Jewish faith leaders which became the basis of declarations establishing the compatibility of Judaism with French law
▪︎▪︎▪︎
Article 6 mentions the “struggle against all forms of instrumentalization of Islam to political or ideological ends,” with signatories promising to refuse “the promotion of what is known as ‘political Islam.’” Signatories also commit to gradually moving away from receiving foreign financing.

▪︎▪︎▪︎
The text explicitly supports the French ideal of laïcité — separation of church and state — and rejects discrimination, gender inequality and “certain cultural practices which claim to belong to Islam