Skip to content
❤for u💙
Don’t compete silly women by uploading your beauty too
But
Compete Sahabiyat who no one saw them yet still today people mention them
⚘👇🏻
⚘Hadeeth——> “Gabriel came to me and said, ‘O Muhammad, live as you wish, for you shall eventually die. Love whom you desire, for you shall eventually depart. Do what you please, for you shall pay. Know that the
👉🏻night-prayer  is the👉🏻 honor of a believer, and his👉🏻 pride is being independent on others.’”
▪︎Ref: [Silsilah al-Saheehah]
▪︎▪︎▪︎▪︎
●Venting with oposite gender is haram
■Sending friend requests to opposite gender is haram
●Females uploading pics on Facebook is not permissible
●Emojis between opposite genders are not permissible to use
🌏👇🏻
🌏Venting with oposite gender is haram
👇🏻
https://www.facebook.com/617199062042376/posts/1006552933106985/
▪︎▪︎▪︎▪︎▪︎
🌏Sending friend requests to opposite gender
👇🏻
https://www.facebook.com/617199062042376/posts/1008960062866272/
🌏Females uploading pics on Facebook is not permissible
👇🏻
https://www.facebook.com/617199062042376/posts/1015414115554200/
👇🏻
https://m.facebook.com/story.php?story_fbid=1122670028108128&id=100010954242106
▪︎▪︎▪︎▪︎▪︎▪︎▪︎
🌏Emojis between opposite genders are not permissible to use
https://www.facebook.com/1227753360663437/posts/2863559970416093/
■■■■■■■■
Dear compromisers and sugar coated coconut Muslims who love to flower Islam to fit the west. How coward you are!!!
Why not sticking to Islamic principles no matter what
What a weak shape of Islam you present!!!!
🌋🌋🌋🌋
🌋With Islamophobia growing in the Western world, many Muslims feel it is our duty to “sugar coat” or change the message of Islam in order to make the religion seem acceptable to Western culture. Many of us will take something controversial and try to convince those around us that Islam meant “something else” and that the real message is compatible with American culture.
🌋⛰Unfortunately, as so many people begin to make these excuses, some Muslims begin to feel they are true and the original message put forth by the Qur’an is now changed to fit a culture that is not always compatible with the Islamic way of life. One of these topics is that of ……
🌋Stop flowering Islam to fit the Western loose culture
🌋Stop being a munafiq when you know for sure in your heart that you are going against Islam
🌏🌏🌏🌏🌏🌏
This chaos done by some need to stop
Many are compromising Islam
They want a Western version of Islam
They don’t change themselves for Islam
But they beautify Islam to accommodate to their whims and desires
They change Islam for themselves
Astaghfirullah
—–
IIN 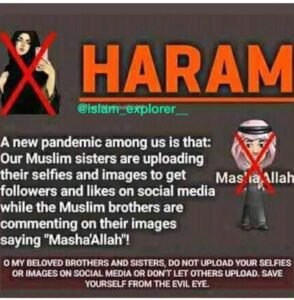 One thought on “Venting with Females on Social Media..Uploading pics..Emojis amongst genders”