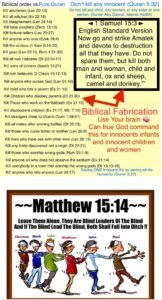 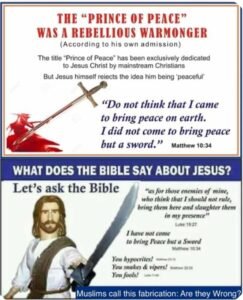 MUSLIMS ARE NOT TERRORISTS
AND
TERRORISTS ARE NOT MUSLIMS.”
AND ABOVE ALL NEITHER OF THE WEAPONS OF MASS DESTRUCTION AS WELL AS ANY ASSAULT WEAPONS ARE INVENTED BY MUSLIMS.
AND ABOVE ALL EVEN THE ARMS GIVEN AND SUPPLIED TO THE SO CALLED MUSLIM TERRORIST ARE NOT BY ANY ISLAMIC INSTITUTE.
These double standards against Muslims must be removed because they are now worn out old stories
~~~~~~~~~
Now on ISIS
👇🏻
Trump reveals ISIS is made by US. he says
Hilary Clinton created ISIS with Obama
https://youtu.be/t1qRgfw3Yk0
●watch
👇🏻
https://m.facebook.com/story.php?story_fbid=857979597910507&id=100010954242106
💥💥💥
Shocking truth. ISIS is not made by Muslims
مترجم. أدلة دامغة: داعش صناعة غير المسلمين
Watch also here
Trump says it clearly
Here Hilary Clinton created ISIS with Obama
Lol
https://youtu.be/t1qRgfw3Yk0
▪︎▪︎▪︎
Therefore,
Today’s west’s definition of
Terrorism is:👇
a Western new terminology meaning  Muslims’ defence of religion, land and petrol
West only has the right to attack but Muslims should handle their properties to the West as indians did to America
Americans experts themselves says “CIA” made ISIS
👇🏻
https://youtu.be/wLv1IGVE69c
Now that you accuse us
In case Korea attacks America and Americans fight Korea back
will you call that terrorism? !
I defy you to.
what is this awful double standard you are using?
Is Muslim blood not the same as west’s or is it the new terroristic racism of crusaders in those countries
it’s the west that caused all what u said
stay back in your countries allies of hell greedy for Iraqi gold and syrian petrol
We didn’t go to anybody to fight we only fight enemies of Islam because they came to us to steal our lands and petrol
Muslims killed few thousands to defend themselves and they have the right to. While non muslims have killed 1 billion ppl so far may be because they are applying exactly what the bible is preaching
QURAN SAYS
60:8) Allah does not forbid you from those who do not fight you because of religion and do not expel you from your homes – from being righteous toward them and acting justly toward them. Indeed, Allah loves those who act justly
Prophet Muhammad , peace and blessings be upon him said something amazing which i’d like all non Muslims to know:
“Whoever killed a person having a treaty of protection with the Muslims, and who enjoys the guarantee of Allah and His Messenger, he will have spoiled the guarantee of Allah [for him]. He shall not smell the scent of Paradise though its smell is perceived from a distance of seventy years.”
Source: Sahih Bukhari 6516
*** Now the question is:
Who killed 1 billion overall and lately 1 billion people including 200 million native indians to take the so called ”new world ” from them and  who killed 80 million people in the 1 & 2 world wars and who is still killing in the whole islamic world
They never defined these berbarous masacres and criminal occupations against humanity terrorism
a criminal never accuses himself
Now compare this huge millions of deaths to fews hundreds killed by Muslims in defence over their lands
today muslims only defend themselves because the west wants to take petrolium from us by force and stop islam from spreading however at the time when islam is strong and it will prevail of course soon prophet says don’t kill a priest or a prisoner or a child or a woman or an old man on the contrary of these beautiful war behaviours the west losen their dogs to bite muslims in the scandal of guantanamu on innocent ppl who are free of the monstrous ISIS
Don’t overgeneralise.
I can do it too with the KKK organization in America killing innocents in the name of jesus and the terrorists that kill muslims in Central Africa in the name of the bible too
thus say all christians are bad ?!
maybe because they are applying exactly what’s in the bible
which preaches real killing;
Jesus is said to say in the bible ((But those mine enemies, which would not that I should reign over them, bring them, and slay (slaughter) them before me. … Luke 19:26 • Luke 19:28 • Chapter 19 ))
and in Deuteronomy 12:13-16 it says “when you find a city worshiping different god destroy the city and kill all its inhabitants… including their animals… this include children, old ages, women etc.
However The law of jihad in islam is totally different prophet Muhammad says when in war don’t kill a woman or a kid or a priest in his church don’t cut trees don’t kill animals etc.
And what some say of muslims Killing is simply done when war is on and to spread Islam that’s done only when islam is strong as happened before The land is Allah’s so whoever refuses islam they must pay Tax or are fought to let Islam spread
there’s no hatred at all in the quran quran says there is no compulsion in religion if u want to believe or disbelief it’s up to u but if you don’t you must pay tax inside muslim country if u’re a non muslim living amongst muslims
———
Nelson Mandela was exiled to a far place for being terrorist N* 1 on earth
but after he was set free they gave him peace prize for being a terrorist. Terrorism is defined by tyrants and their media according to their will, lusts and welfare
if Nelson had been a Muslim he would never win such prize. Actually Muslims are deprived of bonuses. We are killed everywhere just bc we believe in One God. Whereas if a non muslim kills as happened lately in America and Europe or NZ
the poisonous media treats with double standard and reveals the fake as true and true as fake behind them are the one eyed kafir recruiters💥⛛☡☠
We Muslims are awakened up now
Thanks terrorists and Islamophobia promoters you really awakened us
—————————-
°°°°°°
By IIN