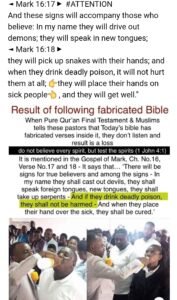 Death From Poisoning does not disprove authenticity of true Prophet; if you think it does then Jesus itself not True Prophet:

The Gospels show that Jesus immediately died after drinking the vinegar by vinegar poisoning:

Now there was set a vessel full of vinegar: and they filled a spunge with vinegar, and put it upon hyssop, and put it to his mouth. When Jesus therefore had received the vinegar, he said, It is finished: and he bowed his head, and gave up the ghost. (John 19:29-30)

This proves Jesus was poisoned, the vinegar is supposed to have stimulating effects, yet it killed Jesus instantly!

This is where it gets interesting. Jesus himself made mention of Prophet Muhammed Pbuh in a prophecy to the Jews.

29 “Woe to you, scribes and Pharisees, hypocrites! For you build the tombs of the prophets and decorate the graves of the righteous, 30 and you say, ‘If we had lived in the days of our ancestors, we would not have taken part with them in shedding the blood of the prophets.’ 31 Thus you testify against yourselves that you are descendants of those who murdered the prophets. 32 Fill up, then, the measure of your ancestors. 33 You snakes, you brood of vipers! How can you escape being sentenced to hell? 34 Therefore I am sending you prophets and sages and teachers. Some of them you will kill and crucify (Matthew 23:34)

From context, Jesus is condemning the learned Jews for their actions. he is exposing their lies and deception towards the people and themselves. The interesting part is verse 34

“Therefore, I am sending you prophets and sages and teachers. Some of them you will kill and crucify “

Here Jesus is prophesising “the Jews will Kill and crucify Prophet, sages and teachers” in the future. note this is a future tense not past.

When Khaibar was conquered, a roasted poisoned sheep was presented to the Prophet (ﷺ) as a gift (by the Jews). The Prophet (ﷺ) ordered, “Let all the Jews who have been here, be assembled before me.” The Jews were collected and the Prophet (ﷺ) said (to them), “I am going to ask you a question. Will you tell the truth?” They said, “Yes.” The Prophet (ﷺ) asked, “Who is your father?” They replied, “So-and-so.” He said, “You have told a lie; your father is so-and-so.” They said, “You are right.” He said, “Will you now tell me the truth, if I ask you about something?” They replied, “Yes, O Abu Al-Qasim; and if we should tell a lie, you can realize our lie as you have done regarding our father.” On that he asked, “Who are the people of the (Hell) Fire?” They said, “We shall remain in the (Hell) Fire for a short period, and after that you will replace us.” The Prophet (ﷺ) said, “You may be cursed and humiliated in it! By Allah, we shall never replace you in it.” Then he asked, “Will you now tell me the truth if I ask you a question?” They said, “Yes, O Abu Al-Qasim.” He asked, “Have you poisoned this sheep?” They said, “Yes.” He asked, “What made you do so?” They said, “We wanted to know if you were a liar in which case we would get rid of you, and if you are a prophet then the poison would not harm you.” (Sahih al-Bukhari 3169)

Do you see the correlation?

Jews will kill Prophets. Prophet Muhammed Pbuh was poisoned by the Jews to kill. If the latter is agreed by Christians, then this is a clear-cut confirmation of Prophet Muhammed Pbuh as being the true Prophet of God. If Christians say no he survived then the poison made no effect, which would make it a miracle, again proving God saved his Prophet.

Either way Prophet Muhammed Pbuh was a true Prophet of God. Note, Jesus himself said the Jews will kill Prophets. Also, can Christian show us historically how many “PROPHETS” were killed and crucified after Jesus by the Jews? 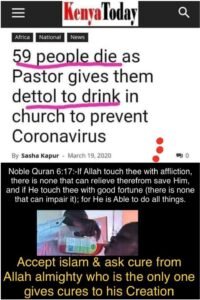 Response to suspicion of magic to the Prophet, peace be upon him 🔆

〽️ Second: In this story there is evidence of prophethood. He told the Prophet, may blessings and peace be upon him, that God revealed to him what was happening to him, and he told that the one who had performed it was Labid Ibn al-Asam. Indeed, he knew that the magic was in a comb and a misfortune that dried up a male cast, and it was reported that this magic was in the well of Dharwan .. ..; Who would tell him about these unseen things if he was not a messenger from God?

〽️ Third: The Messenger, may blessings and peace be upon him, deciphered the magic by reciting al-Silsilah al-Saheehah – 2761). The greatest evidence is that the two Mu’adhtin are the words of God Almighty and that Muhammad is a revealed prophet. Perhaps God made this so that we could imitate him if we were hit by mischief or magic.
;
Fourth: If the magic was a defect in the message; You did not believe the message of Paul, who was struck by Satan and ruled over him and made him sick. He also said about himself in 2 Corinthians 12: 7-8
“I exaggerated the revelations, I was given a thorn in the body, the angel of Satan, to comfort me, lest I rise.”
Here is your Messenger, O Christians, the angel of Satan dominated him, slapped him and cursed him with the disease of “thorn in the body”

〽️ Fifthly: If you believe that what happened to the Prophet Muhammad at the hands of the Jews of magic, which had no effect on his religion and worship, nor in his message that he was assigned to communicate, if you think that what happened to him was an insult and a slander against his prophethood, does that mean that you brought down prophets Your holy book, which your book stated as disobedient, fornicators, infidels ?!

Did it not appear in your holy book that the prophet of God Solomon disbelieved and the servant of idols, who was one of the prophets of God? Did you disbelieve Solomon’s prophecy ?!

And if what the Prophet Solomon did of prostration to idols and disbelief in God is a matter that does not necessitate contestation of his prophethood and does not extinguish his prophethood with you, then how do you consider what the Prophet Muhammad, may God bless him and grant him peace, of magic that had no effect on his religion and worship or in his message that was assigned Informing her is a positive matter to challenge his prophethood? !!

Finally: If magic invalidates the prophethood; It is a fortiori that the domination of Satan over Jesus to be tempted by the Devil for 40 days would be stronger evidence of the invalidity of his deity.
👇
Do not object, Christian, to a prophet who is bewitched by the Jews. You worship a God who has been tempted by Satan for forty days

▪︎▪︎▪︎▪︎▪︎▪︎
On poison of Jesus who died instantly after he drank it lol
https://iinetwork.org/index.php/2020/12/28/jesus-died-of-poison/

Narrated by Saud; the Messenger (Sallallaahu Alayhi Wasallam) said, “If Somebody takes seven ‘ajwa dates in the morning, neither magic nor poison will hurt him that day.” [Sahih Bukhari, Book #71, Hadith #664 (also 663, 672)]
👇🏻
https://youtu.be/Ox-8fE4VUYE
Sheikh Uthman Al Khamiss says when someone wants to give triumph to Islam That’s not suicide and Allah humiliates the adversary by this
and this was done by Khalid Ibn El Walid and Ibn Taymiya was about to put his hand in fire but the Sufi retrieved 🤣