English Men Once Sold Their Wives Instead of Getting Divorced

George Wray tied a halter around his wife’s waist and headed to the nearest market. He wasn’t there to buy anything—he was there to sell his wife. 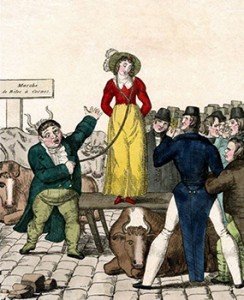 Onlookers shouted as he auctioned her off to the highest bidder, William Harwood. After Harwood turned over a single shilling to Wray, he put his arm around his purchase. “Harwood walked off arm in arm with his smiling bargain,”reported an onlooker, “with as much coolness as if he had purchased a new coat or hat.” It was 1847, and Wray had just gotten the equivalent of a divorce. 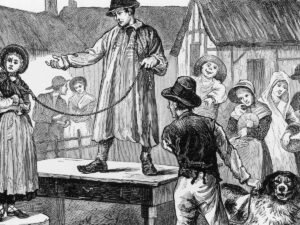 The scene sounds like an elaborate joke. In reality, it was anything but. Between the 17th and 19th centuries, divorce was prohibitively expensive. So some lower-class British people didn’t get them—they sold their wives instead. The custom seems outlandish today, but it could be found in public places like markets, taverns and fairs. Historians disagree on when or how the custom started and how widespread it was, but it seems to have been an accepted alternative divorce among lower-class Britons. Wife sales were crude and funny, but they also served a very real purpose since it was so hard to get a divorce. 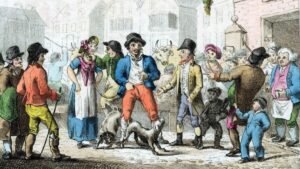 If your marriage broke up in the 1750s, you had to obtain a private Act of Parliament—essentially, an exception to Britain’s draconian divorce law—to formally divorce. The process was expensive and time-consuming, so wife-selling arose as a form of faux divorce. It wasn’t technically legal, but the way it unfolded in public made it valid in the eyes of many.

People could simply abandon one another, but a woman who entered into relationships with other people were in constant danger of their previous husband swooping in to punish her new lover and get some money in the process. Legally, her husband could demand that his wife’s lover pay him a large amount of money for having sexual relations with his wife, a right she lacked since courts didn’t allow wives to sue their husbands for adultery. Wife sales were a way to sidestep that risk. 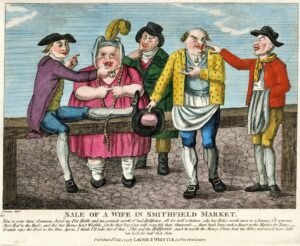 An illustrated scene from Thomas Hardy’s novel “The Mayor of Casterbridge” of a man selling his wife to highest bidder. (Credit: Universal History Archive/Getty Images)

Oddly enough, the sales took on theform of cattle auctions of the time. After announcing the sale, the man would put a ribbon or a rope around his wife’s neck, arm or waist and lead her to “market” (either an actual market or another public place). Then, he’d auction her off, often after declaring her virtues to the onlookers. Once she was purchased by another man, the previous marriage was considered null and void and the new buyer was financially responsible for his new wife. 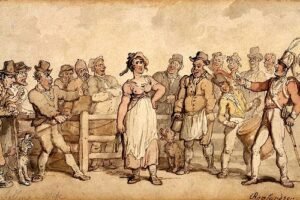 Usually, wife sales were merely symbolic—there was just one bidder, the woman’s new lover. Sometimes there wasn’t a designated buyer, though, and an actual bidding war broke out. Men could announce a wife sale without informing their wife, and she might be bid on by total strangers. But women had to agree to the sale.
It would seem that the woman was at a disadvantage during a wife sale, but that wasn’t always the case. Since she was still married to her first husband under the law, he was technically entitled to all of her possessions (at the time, married women’s property all belonged to their husbands). The public nature of the sale, though, made it clear to one and all that the seller gave up his right to his former wife’s possessions. And the woman also sidestepped the very real threat of having her new lover sued by her first husband for “criminal conversation.” 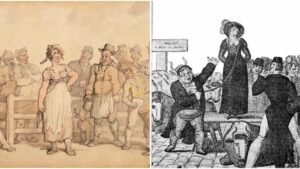 “Through the sale,”writes legal scholar Julie C. Suk, “the first husband extracted a bribe from the wife’s lover in return for waiving his civil cause of action for criminal conversation.”

A husband in desperate need of money, selling his wife to the highest bidder in Guthrie, Oklahoma. (Credit: Bettmann Archive/Getty Images)

Public humiliation also played a role. Treating his cheating or estranged wife like a cow—even announcing her weight in public and bartering her like a farm animal—seems to have satisfied many bitter husbands. But usually, wife sales didn’t end in enmity. The wife, her new husband and her old one usually sat down for a pint of beer and a good laugh.
Overall, writes historian Lawrence Stone, the format of the sale was designed to seem legit. “All this elaborate symbolism had a very real purpose, which was to try to make the sale appear as legally binding as possible, especially with respect to any future financial responsibility by the husband for the wife,” he writes. Some wife sellers even drew up elaborate contracts to make the ritual seem as sale-like as possible.
Technically, though, wife sales didn’t dissolve the underlying marriage, and police eventually began breaking up the sales. Stone thinks that the practice was extremely rare, and that it attracted more attention than it deserves because of the temptation to spread word of the strange ritual far and wide—and even to make up fictional wife sales to sell newspapers. “In the end,”writes historian Roderick Phillips, “too little is known about wife sales to enable us to draw firm conclusions.”

What is clear, though, is that attending, talking about, and inventing wife sales was amusing indeed. Even the seller and his wife were usually described as gleeful and happy during the sale.
Take Joseph Thompson, who allegedly sold his wife in 1832,listed his wife’s bad qualities, calling her “a born serpent” and advising the buyers to “avoid frolicsome women as you would a mad dog, a roaring lion, a loaded pistol, cholera.” Then he listed her assets, which included the ability to milk cows, sing, and serve as a drinking companion. “I therefore offer here with all her perfections and imperfections, for the sum of fifty shillings,” he concluded, adding a fun flourish to the end of his marriage.
Wife sales largely ended in 1857 when divorce became easier. With it died a custom—and tales of the tradition are just as bizarre and entertaining as they were then.