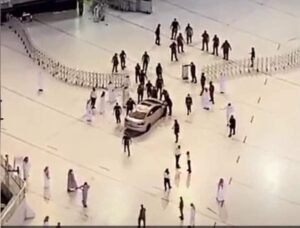 A driver rammed his car into the outer-perimeter gate of the Grand Mosque in Mecca late on Friday in an incident that did not cause any casualties, local media reported. 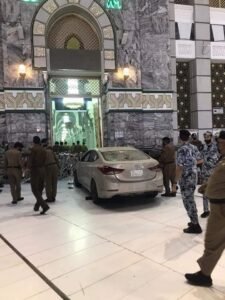 Videos posted on social media show the car plowing through plastic barricades in the outer courtyard of the mosque before driving straight into one of the large outer doors.
The local Al-Waeem newspaper reported that no civilians were injured in the crash, while other videos posted on social media showed a number of people pushing the vehicle away from the mosque complex. 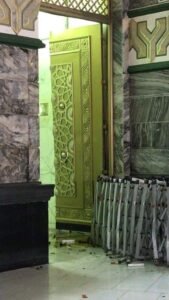 Saudi Arabia’s state-run channel Saudi Qur’an continued to broadcast live video from inside the mosque during and after the incident.
The Grand Mosque resumed congregational prayers earlier this month after a seven-month hiatus amid the novel coronavirus outbreak.
On Sunday, the kingdom will allow some foreigners to perform Umrah, a pilgrimage to the cities of Mekka and Medina that can be done at any time of the year.
Umrah has historically attracted millions of pilgrims from around the world, but because of Covid-19, Saudi authorities have said they would gradually phase in the number of pilgrims allowed into the two holy cities.