Skip to content
And believe in Mohamed as last and final messanger
And our beloved Jesus his a messanger of God
The claim that Allah was worshipped as a moon god in Arabia is a fringe theory that has been promoted by some groups of American evangelicals since the 1990s.[1][2] The idea was supposedly promulgated by Hugo Winckler in 1901, and proliferated from a publication of Robert Morey’s pamphlet The Moon-god Allah: In Archeology of the Middle East (1994) which was eventually followed by his book The Islamic Invasion: Confronting The World’s Fastest-Growing Religion (2001). Morey’s ideas were popularised by cartoonist and publisher Jack Chick, who drew a fictionalised cartoon story entitled “Allah Had No Son”.
The Quran itself condemns moon worship. Muslim scholars cite the 37th verse of Sura Fussilat as proof against the moon god claim:
وَمِنْ آيَاتِهِ اللَّيْلُ وَالنَّهَارُ وَالشَّمْسُ وَالْقَمَرُ لَا تَسْجُدُوا لِلشَّمْسِ وَلَا لِلْقَمَرِ وَاسْجُدُوا لِلَّهِ الَّذِي خَلَقَهُنَّ إِن كُنتُمْ إِيَّاهُ تَعْبُدُونَ
“And among His signs are the night and the day and the sun and the moon; do not make obeisance to the sun nor to the moon; and make obeisance to Allah Who created them, if Him it is that you serve.”
The Prophet (ﷺ) used to supplicate:
🕋Transliteration
“Allahumma ahillahu ‘alaina bil-amni wal-iman, was-salamati wal-Islam, Rabbi wa Rabbuk-Allah, Hilalu rushdin wa khairin
🕋Meaning
(O Allah, let this moon appear on us with security and Iman; with safety and Islam. (O moon!) Your Rubb (Lord) and mine is Allah. May this moon be bringing guidance and good).”
[At- Tirmidhi].
How could he worship a moon when he says to it
My Lord and your Lord is One God Allah
IIN
IINETWORK.ORG 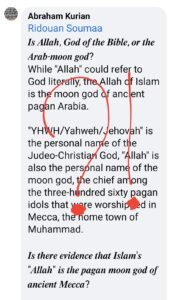