Skip to content
💥Deobandis promote Wihdatul wujud and are not Sunnah?
They can reach disbelief if they follow deoband of course
💥🕳As for Aqeeda
Deobandi is a cocktail pot they take from here
and there not Sunni at all
👇
The Deobandis follow the Maatreedi madhhab with regard to belief (‘aqeedah), we have to define what al-Maatreediyyah is:
This is a philosophical (kalaami) group which is named after Abu Mansoor al-Maatreedi. It is based on using rational and philosophical proof and evidence in disputes with opponents from among the Mu’tazilah, Jahamiyyah and others to establish the truths of religion and Islamic ‘aqeedah (belief
🚫🕳Deobandis believe in Wihdatul Wujud anthropomorphy or incarnation
of Ibn Arabi
Which means God is servant and the servant is God
Their Fatwa on their website:
Question # : 1989
Germany
Ibn Arabi said,
“العبد رب و الرب عبد”
or “al-`abd-u rabb-un wa-r-rabb-u `abd-un” (the slave is the lord and the lord is the slave).”
Sufis claim that such statements were always considered to be the most elevated exposition of mystical thought in Islam, and therefore unsuitable for the untrained mind. Ibn Arabi has also said
, “الرب رب في التنزل والعبد عبد في الترقى”
or “ar-rabb-u rabb-un f? t-tanazzul-i wa-l-`abd-u `abd-un f? t-taraqq?”
(The lord is a lord in his descent [to his creations] and a slave is a slave in rising).
in Fusoos Al-Hikam” and “Al-Ahkaam. Is such aqeedah right?
IF yes what does it mean, please explain it clearly.
Answer : 1989
Published on: Nov 7, 2007
Answer their website gives 👇
(Fatwa: 706/D=6/K)
Common Muslims should not study such books which are beyond their understanding. They should only follow the beliefs that are clearly mentioned in the Quran and Hadith, which have no vagueness or confusion. They should only believe that the tasawwuf which is proved and supported by the Quran and Hadith is correct.
http://www.darulifta-deoband.com/home/en/Tasawwuf/1989
🚩🕳Deobandi are Sufia and worship saints
🏴Fatwa: 519/519=L
Question # : 2043
Pakistan
Do we get any benefits by doing spiritual communion (Muraqiba) at the graves of saints?
Answer : 2043
Published on: Nov 11, 2007
سم الله الرحمن الرحيم
(Fatwa: 519/519=L)
Those who are perfect and well versed, they get benefit. Every layman is not allowed to do so; rather he is feared to be misled
🌎
🕳🕳Deobandi commit grave major shirk
ask Dead graves for their things
Fatwa: 1515/1169/B=11/1434)
(1) Only by standing beside the grave of a Prophet you may request him for dua.
http://www.darulifta-deoband.com/home/en/Islamic-Beliefs/48365
👇
💥🕳THEY ARE NOT BECAUSE THEY REJECT THE HADEETHS
🌎
🌐They don’t follow the hadeeth Mawqoof
They don’t follow the hadeeth Mawqoof
“And it is the Madhab of a Sahaabi which is not Hujjah for anyone” [Bazl al-Majhood 5/39 H. 821]
🚩“And it is the Madhab of a Sahaabi which is not Hujjah for anyone” [Bazl al-Majhood 5/39 H. 821]
🚩The Imaam of Aal-e-Deoband, Mulla Ali Qaari al-Hanafi writes:
“وهو مذهب صحابيلا يقوم به حجة علي أحد”
🏴“And it is the Madhab of a Sahaabi which is not Hujjah for anyone” [Mirqaat al-Mafaateeh Sharh Mishkaat al-Masaabeeh (2/549 H. 823)]
🚩 “Shaykh ul-Hadeeth” of Deobandis, Muhammad Taqi Uthmaani said:
“This narration is Mawqoof, thus there is no Hujjah in it” [Dars-e-Tirmidhi 2/169]
🌏
Sikhs originated from Hinduism, but are not Hindus, and Protestants came from Roman Catholicism, but are not Catholics,
Similarly, the Deobandi sect originated in the Sunni community, but are not Sunnis

Deobandi disrespects Sahaba
According to the Hanafiyyah, Faatimah was not given housing because she was long-tongued/abusive” [Taqaareer Shaykh ul-Hind (P. 133)]
🐶🐘
🚩Deobandis say that Imam Abu Hanifa regarded Dogs to be Najis (Impure) but deobandis dont accept this view of Imam Abu Hanifa. Hence Abdul Shakoor Lakhnawi has written:
” It is correct that Dog and Elephant are not Najis.”
🐕🐘
“One Rak’ah witr is not permissible”
For deobandis but ok in Sunnah
[Tajalliyaat-e-Safdar (2/573)]
👇
The response
The night prayers are two (rak’ahs) by two, but if one of you fears that dawn is about to break, let him pray one rak’ah to make what he has prayed odd-numbered.”
🏴Narrated by al-Bukhaari, 911; Muslim, 749.
Pray 13 Rakaats with tasleem after each two then finish with 1 Rakaa and Make tasleem
Prophet Muhammad
peace be upon Him
used to do that.
🏴Narrated by Ibn Hibbaan (2435); Ibn Hajar said in al-Fath (2/482)
its isnaad is qawiy (strong)
🏴
They also reject the act of Sahabi
Abdul Qayyoom Haqqaani Deobandi wrote:
“The most reasonable and correct answer is that this was the personal act and the person Ijtihaad of Hadhrat Ibn Umar….. After all the Ijtihaad of a Sahaabi is not even Hujjah especially when there are the Athaar of other Sahaabah on the contrary” [Tozeeh us-Sunan (1/405)
🚩further he wrote:
“One Rak’ah witr is not permissible” [Tajalliyaat-e-Safdar (2/573)]
🚩According to Imam Abu Hanifa, If a husband of a woman is lost then the Woman cannot marry some one else until her lost husband reaches the age of 120 years old. [Al HIdaya 1/623 Kitaab ul Mafqood, Qudoori page 155]
🚩falsehood in fiqh. Understanding of Islam
When she remains waiting until such a time that her husband must have reached 90 years of age,we will give the ruling that he must have passed away by now. Based on this, if a woman is still young and she wishes to remarry, She must wait until her husband’s age must have reached 90,
[Bahishti Zewar part 4 Miyaan ke La pata hojaanay ka bayan
🚩Nutshell: Deobandi rejects Imam Abu Hanifa in Fiqh
Look what deobandi say
Therefore, the correct answer to this is that it is the personal act and Ijtihaad of Ibn Umar, there is not differentiation in it narrated from the Marfoo ahaadeeth; moreover, the Ijtihaad of a Sahaabi is not Hujjah, especially when there are the other Athaar of Sahaabah present in opposition to it” [Dars-e-Tirmidhi 1/191]
■
Proofs Deobandi are Ashaari and Naturdi
http://www.darulifta-deoband.com/home/en/Islamic-Beliefs/295
🌎Deobandi are Ashaira
believe Allah had no hands no face and that it is mercy and power
Fatwa Fatwa: (472/J)
if anyone takes a meaning that is suitable for the high position of Allah (Suhanahu Wa-taala) then it may be allowed e.g. Hand means power and Face means He himself.
http://www.darulifta-deoband.com/home/en/Islamic-Beliefs/344
▪︎▪︎▪︎▪︎▪︎▪︎▪︎▪︎▪︎▪︎
By IIN 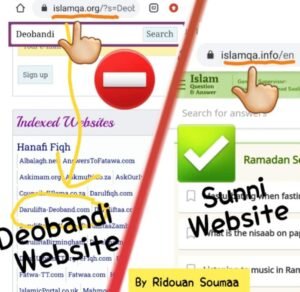 243 thoughts on “Are Deobandis Sunnah?”